Category:
Laboratory bench tests indicate the versatility of VANLUBE 727 as an additive for various types of automotive and industrial lubricating oils. VANLUBE 727 functions as an antiwear agent and antioxidant. The fact that it is nonmetallic makes it of interest for ashless or low-ash applications. Some suggested areas of application are: automotive engine oils, railroad diesel oils, compressor oils, gas engine oils, antiwear hydraulic and turbine oils, and various types of industrial oils. Bench tests indicate that the performance of VANLUBE 727 is competitive with that of commonly used zinc dithiophosphates. One percent in SAE 90 gear oil gives a 12-stage pass in the FZG test. 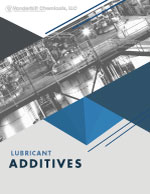 Thank you for Requesting a Quote.

Thank you for Requesting a Sample.

Thank you for sending a Technical Question.

Some of these are necessary and operated by us, while others are used for functional reasons, to analyze performance, and to personalize your experience.
By using this site, you agree to accept these cookies as described in ourPrivacy Policy. OK